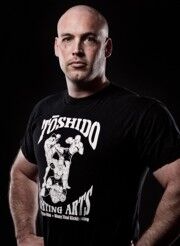 David Lea is one of the most respected MMA Trainers in the Country.  After opening the famed Toshido MMA Club in 1998, David has gone on to train numerous National Champions, World Champions, and is the trainer of UFC Sensations Rory MacDonald, Sarah Moras, Matt Dwyer, and Shane Campbell.

As a pioneer in the MMA industry, David was the first person in Western Canada to promote a 100% Mixed Martial Arts show, held in Kelowna, and in 2002, David successfully lobbied the City of Vancouver to allow the first Professional MMA show to ever be sanctioned in the city’s history.

Throughout his career, David has lead through example.  Before a series of injuries prematurely ended his fighting career, David went undefeated in MMA competition with a record of 3-0.  Along with a Black Belt in Japanese Jiu-Jitsu, David became one of only three No-Gi Brazilian Jiu-Jitsu Black Belts under fighting legend and 3rd Degree Brazilian Jiu-Jitsu Black Belt, Chris Brennan.  To ensure that Toshido MMA has the most well rounded training available, David has also dedicated close to 20 years gaining experience in Muay Thai Kickboxing, Boxing, and Wrestling, from numerous World Champions.

David’s vast experience in the Martial Arts has given him the opportunity to train some of the World’s top professional fighters, as well as members of the Canadian Armed Forces, RCMP, and Municipal Police.  However, David is most proud of his work helping ordinary people reach their personal fitness and martial arts goals.

David has been interviewed locally and nationally through numerous radio and newspaper outlets, and has been showcased on a number of TV shows including “X-Weighted” on the Slice Network, “UFC Countdown” on SPIKE TV, and “David Lea’s Fight Camp” on the Fight Network, to name a few.